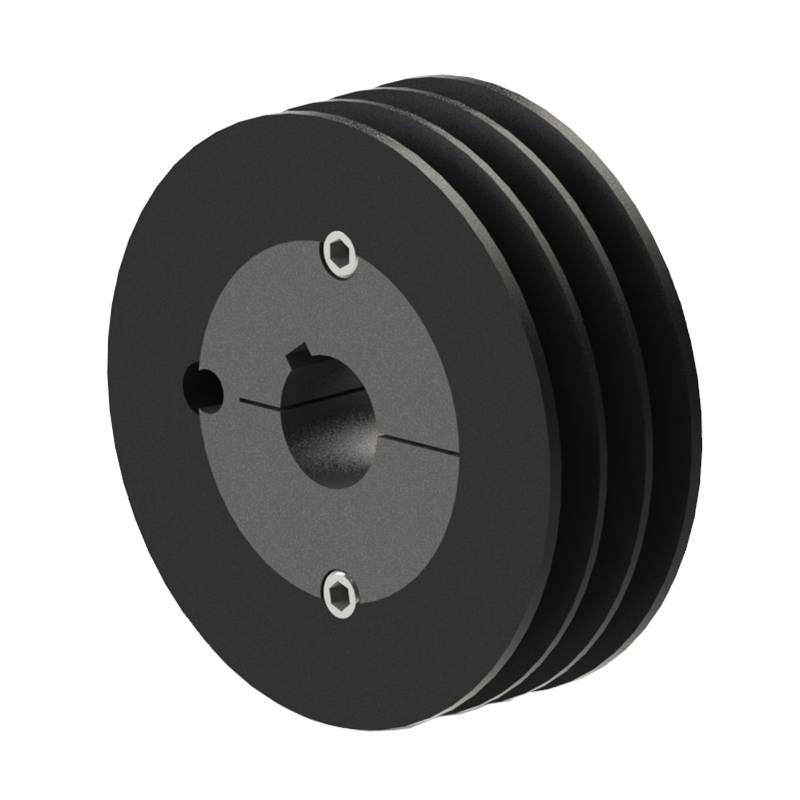 V-belt pulleys (also called v- belt sheaves) are devices which transmit power between axles by the use of a v-belt, a mechanical linkage with a trapezoidal cross-section. Together these devices offer a high-speed power transmission solution that is resistant to slipping and misalignment.

V-belt pulleys are solely used for transmitting power between two parallel axels. The most notable difference between a v-belt pulley and other types of pulleys (round belt, flat, etc.) would be the geometry of the groove or grooves located around the circumference of the pulley; these grooves guide and gain traction on a v-belt.

A v-belt is a unique mechanical linkage with a cross-section that resembles an isosceles trapezoid. The v-belt and its complementing pulley create the most efficient belt drive known (sometimes achieving 98% transmission efficiency). V-belts were developed in the early days of automobile innovation to improve belt reliability and torque transmission from the crankshaft to rotating assemblies. V-belts remain a common type of serpentine belt today.

V-belt transmissions are a notable upgrade from round or flat belt transmissions; v-belts provide excellent traction, speed, and load capabilities, while enjoying an extended service life with simple replacement. Heavy loads actually increase transmission efficiency since they wedge the belt further into the pulley’s groove, thereby improving friction. Typically, v-belt drives operate between 1,500 to 6,000 ft/min, with 4,500 ft/min the ideal capacity for standard belts. Some narrow v-belts can operate at speeds of up to 10,000 ft/min, but these pulleys must be dynamically stabilized. V-belt pulleys may be placed in a side-by-side configuration or a single pulley may feature multiple grooves around the circumference in order to accommodate a multiple-belt drive. This type of drive distributes torque across several belts and provides a mechanical redundancy.

Write your message here and send it to us